A land of soaring peaks, majestic forests and bustling cities, Japan is a study in contrast. Subtle beauty and local charm sit comfortably alongside awe inspiring vistas and history-steeped tradition. In the magical Tohoku region, host to several Olympic events, modern athleticism is set against a backdrop of incredible beauty.

Whilst most attention will be focussed on the sprawling capital that lends its name to the upcoming Tokyo Olympics, a collection of events will be dotted throughout the country and will offer fans both at home and abroad a glimpse into the charms of the other Japan, the one beyond Tokyo.

One of the most underappreciated yet scenic regions of the country is the six-prefecture expanse, stretching centrally from the north of Tokyo to the body of water that separates the main island of Honshu from that of Hokkaido, known as Tohoku.

The region will host baseball, softball and football matches in the forthcoming Games with the eyes of the globe turned to Tohoku as the very first event takes place there when Japan and Australia meet in the softball opener in Fukushima on July 21 – the first time since 1996 that football hasn’t kicked off the quadrennial extravaganza. 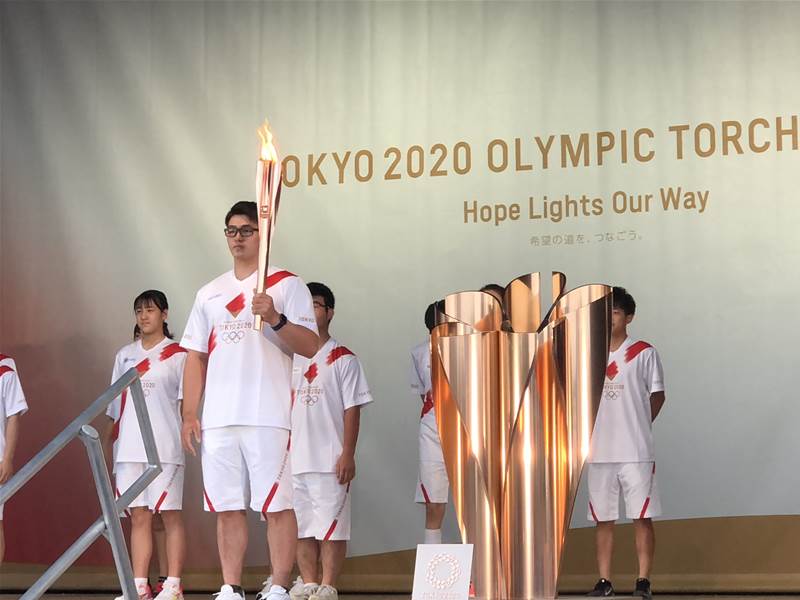 A week later, Fukushima is also the venue as Japan hosts the Dominican Republic to get the baseball competition started whilst the prefecture of Miyagi could be a focal point for the Olyroos as Graham Arnold’s side play their final group stage match there against Egypt in the men’s football tournament.

Whilst legends could well be created in those events, they’ll do well to top the narrative that sees Tohoku as the final resting place for one of history’s great figures.

In Akita Prefecture, another historical figure is held in the reaches of Japan’s deepest body of water, Lake Tazawa. 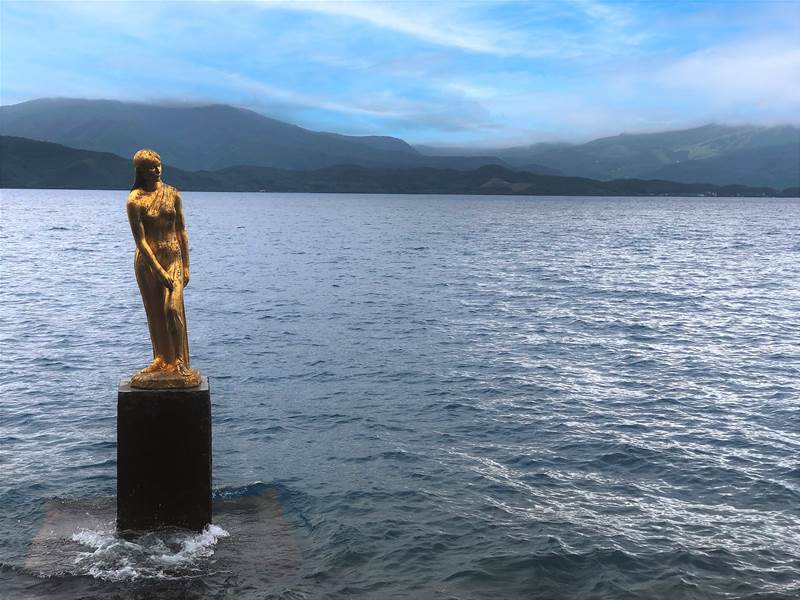 Legend has it that a local woman, Tatsuko, who was renowned throughout the region for her beauty, and desired to retain her youthful charms for eternity.

After praying in earnest to those ends for 100 days she eventually received guidance to sip – but sip only – from a local well and she would be rewarded with enduring youth.

Disregarding the guideline to sip no more than three times, Tatsuko gulped down mouthfuls of the youth securing elixir and then peered into a mirror to discover that she’d gone in rather the other direction and turned into a dragon.

In despair, she flung herself into Lake Tazawa where she remains to this day, and where a golden statue was erected to display her former beauty, rather than the current fire and scale version that reportedly lurks below the surface.

Tazawa, an azure, caldera lake is located in Akita Prefecture and with a depth of 423 metres it’s the largest in Japan and one of the 20 deepest of the planet.

The lake itself is an ideal place to explore the charms of northern Japan.

Kayaks can be rented on the shores of the lake as can floating, tent-like, structures that stretch out into the water and make a fine way to while away the afternoon with a few lake-chilled beers from the local brewery, located not far from the shoreline.

Keeping with the theme of stunning nature holding unexpected sights, a little further to the south of Lake Tazawa, but still within the confines of Akita Prefecture is the former samurai town of Kakunodate. Conveniently located on the northern shinkansen (bullet train) line, Kakunodate was formerly renowned as a castle town of some influence in Tohoku but these days is more likely to have camera-wielding tourists roaming its streets rather than warriors engaged in feudal intrigue.

Known as ‘little Kyoto’ and with beautifully preserved samurai residences in a district of two-kilometres in radius, Kakunodate is a glimpse back into the quieter ways of Japan.

You can step into sweeping traditional thatch-roofed homes warmed only by well-crafted architecture and a communal hearth, stroll sprawling gardens, walk down cobbled streets and have your photo taken while wearing traditional samurai armour.

In one of the residences, the former home of the Aoyagi family, there’s a neatly preserved clock still stuck at precisely 2.55 in the afternoon, the moment the last master of the clan passed away, an apt metaphor for the rustic charms of Kakunodate.

Wanko (meaning bowl) soba is the culinary speciality of Iwate, a variation on the buckwheat noodles that are popular throughout Japan, yet the catch in Iwate is that they’re eaten as much as a sporting event as a normal meal. The noodles are served in small portions in a single bowl that can easily be consumed in a single mouthful yet as soon as you’ve finished one bowl, another will appear from staff eagerly gathered around the table ready to keep the soba coming like a weightlifting attendant upping the kilos after each lift.

15 bowls equate roughly to a single meal of ‘regular’ soba and it’s hard to tell if the joy is in the eating or the sporting element of the wanko soba experience.

So popular has the noodle rush become that an annual national championship, All Japan Wankosoba Tournament, is held to determine the Japanese champion, with the current champion consuming 258 bowls in just five minutes!

If you’re looking to walk off the adverse effects of having consumed 258 miniature bowls of soba then a stroll through the historic town of Tono, also in Iwate, is well worth a visit.

The home of more folkloric intrigue from Tohoku, Tono is a rustic stop, more village than town, but is also the location of a well-preserved folk museum, the Tono Furusato Village, where you can see how things were in ancient times with well-preserved traditional houses, rice fields and water mills. Tono is also home to a rich folklore tradition, often retold in public shows by elderly townsfolk in the near indecipherable regional dialect, where you can learn about various spirits, ghouls and mythical creatures including the legendary ‘kappa’ – a kind of amphibious, child-size demon that inhabits lakes and rivers.

Fond of cucumbers and sumo wrestling, the kappa is also one of the more bizarre creatures in Japanese folklore, given that they have a small cavity in their skull where they store water, the source of their power, without which they become paralyzed.

If the thought of having to keep a small pool of water balanced in your head is too much to bear, then it’s possible that you’ve had a few too many cups of one of the fine brands of sake produced in the next prefecture across from Iwate. Miyagi is a meandering region that runs for more than 100 kilometres down the Pacific coast of Japan and which was unfortunately heavily impacted by the devastating 2011 earthquake and tsunami that killed more than 15,000 people.

The city of Kesennuma suffered one of the highest fatalities of any in the country with more than 1,000 deaths, dealing a huge emotional and economic blow to the picturesque region.

A decade on though and Kesennuma’s resilience is on full display with new homes, streets and shops popping up with the city’s inhabitants well and truly back on their feet.

One of the great success stories of Kesennuma is the Otokoyama Honten sake brewery, who saw their main office flattened by the earthquake.

Located at a slightly higher elevation, the brewery itself managed to survive relatively intact and with the staff securing the moromi (sake mash) and locals chipping in with a generator and other supplies, things were back up and running less than four days after the 9.1 magnitude-quake.

These days you can tour the facility, learn about the process of turning rice into alcohol and sample a couple of the company’s delightfully fresh sake products.

Heading south down the coast from Kesennuma you’ll land in what for many will be the highlight of any trip to Tohoku, the major metropolis of northern Japan and the modern city of Sendai.

The second largest city north of Tokyo, Sendai is a bustling city of more than a million residents that will host several key football matches in the upcoming Olympics. Along with the Olyroos playing their decisive final group match there, the men’s tournament will also feature Germany and the Ivory Coast whilst the hosts, Chile, New Zealand, Sweden, Netherlands, China, Zambia and two-time silver medallists Brazil are sure to light things up in the women’s tournament.

The turf at Miyagi Stadium, on the outer limits of the city, was produced as part of a massive regeneration effort after the earthquake in a region that was flattened by great surges of water a decade ago and is known as fukko shibafu (regeneration turf).

Fans across Japan and beyond also recently tuned into the charms of the city as the Olympic Torch Relay wound its way through Sendai, ending with a symbolic lighting of the flame in an athletic venue a stone’s throw from Miyagi Park where the well-backed local baseball side, the Golden Eagles, play their games. No doubt, watching over the ancient torch that’s passed from mythological Greek origins to the Tohoku region of Japan is the founder of Sendai, Date Masamune.

A one-eyed warrior regarded as both a courageous and a fine tactical leader, by the age of 23 he’d managed to control almost half of southern Tohoku and in 1604 he moved to Sendai and began the process of transforming the former fishing village into the bustling metropolis it is today.

References to Masamune are dotted throughout the city, famed for its local cuisine of gyutan (grilled beef tongue), with the mausoleum that holds several of his artifacts and remains a spectacular facility dotted with cedar trees, planted to symbolize long life. At the Zuihoden mausoleum you can learn about various branches of the clan including Masamune’s grandson, Date Tsunamune, who was all set to inherit the family territory before developing such a taste for women and alcohol that he was sent into permanent exile.

Yet another character in this rich and varied region, home to stunning nature, a thriving metropolis and enough ghouls, spirits, fallen heroes and religious icons to fill an enthralling travel itinerary.

Make sure that you don’t miss the charms of the Tohoku region on any journey to Japan and keep an eye out for the region during the current Olympics. The Olympic Dream – Surfing Event Held in this Wavepool 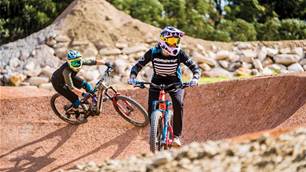 Nutrition: How to build muscle